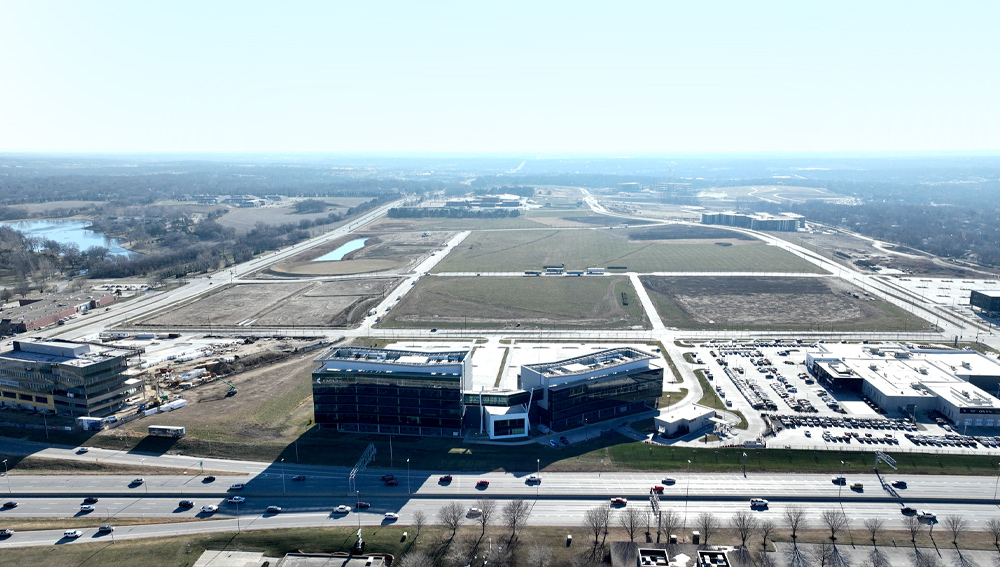 (Omaha, Nebraska…January 11, 2022) With Heartwood Preserve enjoying remarkable advances and successes in 2021 despite the inertia and sluggishness that plagued so much of the real estate and construction markets, the development’s creator sees the year ahead as one of further growth and participation by more and more corporations, residential buyers, retailers and visitors.

Mr. Steve Menzies, Chairman of Applied Underwriters and visionary behind the Heartwood Preserve development on 500 acres in Omaha stated: “Heartwood Preserve, one of the largest urban developments in the US today, has begun to enjoy premier status as a most attractive place to call home for retailers, corporations, residents and fellow citizens who know it as a special destination with a spirit of lift as a place unto itself. Visitors, residents, retail businesses owners and corporate leaders moving to Heartwood Preserve enjoy the responsible management and committed leadership that has made the development singular in the world of jumbo construction undertakings nationally.”

Mr. Menzies noted: “From the first, our approach has fulfilled our stated credo about the future of this prized site, combining respect for the environment, for natural beauty, for architectural and landscape inventiveness at the highest levels, for excellence in access, for lifestyle advantages galore for full time residents, for employees on-site daily, for patrons to the shops and businesses and for occasional visitors who just wish to walk the parklike areas on our picturesque trailways in this City within a City. As we pick up the pace toward completion of Applied Underwriters’ new Omaha headquarters, the excitement has grown. We end the year with our marketing team hitting the 70% sold mark of total real estate, well ahead of schedule. There is palpable ‘enthusiasm’ for Heartwood Preserve.”

Some Key Benchmarks Reached in 2021

70% SALES MARK. With the signing of an agreement in November with Broadmoor Development Company, Heartwood Preserve hit the 70% sales mark for available property either under contract or sold. Among the largest urban projects of its type under construction in the US today, Heartwood has created a sought-after mix of cultivated architectural, landscape and user enhancements that have become a model for projects that combine commercial, residential and retail uses. Featuring eight miles of trails and eighty acres of green space, the 500-acre project has seen its combination of residents find the fresh air and beauty of the site irresistible.

APPLIED UNDERWRITERS. Applied’s campus has seen construction return to regular scheduling of its Omaha headquarters, which will house up to 2,000 employees in a world class, brilliantly and beautifully designed and ecologically respectful building. Underground parking, tasteful indoor décor and brilliant outdoor vistas among the miles of pathways are just some of the advantages. The building is slated for early 2024 occupancy.

VALMONT INDUSTRIES. Global leader, Valmont, has completed its new headquarters and the company’s staff began to move into its new office space. The Valmont facility can accommodate up to 500.

CARSON GROUP. Carson finished its beautiful, new headquarters, and celebrated its completion with a victorious ribbon cutting by CEO and Founder, Ron Carson, who was joined by Governor Ricketts and Mayor Stothert.

HEARTWOOD ESTATES. Remarkably, all available plots were pre-sold rapidly in 2021. The new homeowners are applying for permits to start building in the spring.

LOCKWOOD DEVELOPMENT. Just north of Heartwood Park, the Lockwood enclave has closed to new buyers as the project moves into the next phase, an additional 7.5 acres and site to Heartwood’s first retailers.

RESIDENTIAL DISTRICT. The residential district north of Pacific St. has seen its grading completed, making way for streets and infrastructure to go in next summer as the neighborhood’s 234 homes begin construction.

Giant steps were made this past year in the creation of the outdoor enhancements and recreational areas included in the design and structure of Heartwood Preserve. The crowning jewels of Heartwood lie in the outdoor spaces, framed for the pleasure and use of visitors, residents and staff.

GREENWAY A. The northern portion of this large tract that runs from Dodge to Pacific St. is now 25% complete.

GREENWAY B. The elegant Greenway along Pacific St. is now complete.

HEARTWOOD PARK PHASE I. As the 2021 year closed, earthmoving and grading were completed and sod laid to start the build-out of its boulevard-like sector.

During 2021, Heartwood sustained the right to describe itself as “top award winning,” as the project’s various aspects were lauded by institutions across the nation for particular qualities. The applause goes to several of Heartwood’s brain trust, whose taste and accomplishment have merited these honors:

the Architizer A+ Award, Special Mention.

For further information, contact: Ryan Gerding, Public Relations, at (913) 602-8531 or at press@heartwoodomaha.com.

Located in Omaha, NE, Heartwood Preserve is a 500-acre mixed-use urban development with roughly 80 acres devoted to green space, eight miles of bike paths and open trails and over 10,000 newly planted trees. Offering a wide variety of retail, commercial, residential and recreational facilities on an environmentally observant landscape, Heartwood Preserve is designed to become a top destination for the greater Omaha area and surrounding region.

Applied Underwriters® is a global risk services firm that helps businesses and people manage uncertainty through its business services, insurance and reinsurance solutions. As a company, Applied Underwriters has been distinguished by its innovative approaches to client care and by its strong financial strength. Applied Underwriters operates widely throughout the US, UK, EU and Middle East. Its operational headquarters is located in Omaha, Nebraska.