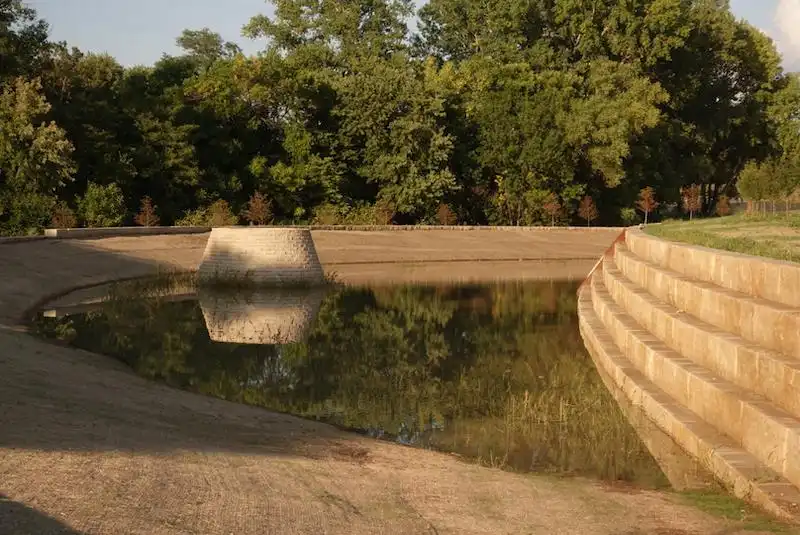 The jewel of the billion-dollar project is an 80-acre Greenway system featuring 13 artfully designed retention basins.

Heartwood Preserve, taking shape in Omaha, Nebraska is one of the largest urban spaces under development in the U.S. It will be both a corporate campus for Applied Underwriters and a public park.

Setting new standards for urban improvements, Heartwood Preserve will be a unique walkable hub with a central park, a commercial district and new housing all connected to prairies and forest systems. The jewel of the billion-dollar project is an 80-acre Greenway system featuring 13 artfully designed retention basins.
This five-hundred-acre parcel of land lies within a watershed ravaged by storms — an increasingly common weather pattern. In 2019 alone, Eastern Nebraska was devastated by unprecedented flooding that devastated residents and farmers and cost over 1 billion dollars in damages.

Prioritizing both aesthetics and function, MSLA conceived a series of open spaces united by the sinuous progression of basins that will become a signature of the project. The network of basins will have the capacity to capture and store an estimated 55  million gallons — 170 acre-feet — of storm water runoff. The greenway system prevents erosion, detains water, recharges aquifers and provides flood protection to adjacent properties and farmland. The detention basins will mitigate peak flow volumes that would otherwise contribute to flooding.

Beyond the critical management of water, the carefully designed basins will mark time and keep the ebb and force of nature front and center. Whether full of water, dry, marshy or frozen solid, the rich spaces provide a range of experiences for humans throughout mid-western seasons. Simple materials and fine craftsmanship carry through the system.

For example, echoing the dry stacked limestone blocks that line the basins are conical cairns in the middle of all the basins that mask overflow outlets. To highlight incoming water, large, weathered steel structures frame and conceal all the inflow pipes. Over time, as water and weather will leave their mark, natural forces that might otherwise go unnoticed will be made visible. Our intention is to aid awareness of a changing planet and contribute to a more climate-resilient world.

Beyond being a timeless place that will have something for everyone, Heartwood Preserve will fortify and protect Eastern Nebraska’s ecological networks. Through the restoration of woodlands, wetlands, prairie and aquifers, the greenways and water basins will provide flora and fauna with a secure future. To support an ambitious plan to plant ten thousand trees, nurseries have been studded throughout the development. Ten established trees that had to be cut down for construction will be “re-planted” and serve as totems and precious habitat for mammals and birds.

Upon completion, the Greenways will contain over 14 miles of trails extending throughout the 500 acres and into Omaha’s “Paths of Discovery” network. Linking into both the West Papio Trail and the 144th Street Trail, these paths will provide more continuity to Omaha’s larger multi-modal trail network, used by bike riders, families and runners. Amenities throughout the Greenways include fire pits, shelters, picnic areas, playgrounds and council rings.

The effectiveness of the design will be determined by its contribution to economic, environmental and social resilience as measured by real estate value, number of jobs created and income generated by business and tourism.

“These basins not only will mitigate flood risk but are also incredible land art in an area that will be well-traveled by the public, “said Bart Emanuel, national director o f development & construction for Applied Underwriters. “As visitors wind their way around the Greenway water basin path, there will be various opportunities for recreation, such as sand volleyball or socializing around a fire pit in the summer and ice skating in the winter.”
Construction on the Heartwood Greenway System began in Spring 2019 and is anticipated to be completed in 2023.